The Famous Roar of the Beast Get’s a Supersonic Boost

Erik Aadahl and Ethan Van der Ryn, the e2 sound design team for the “Godzilla” reboot, have employed the revolutionary Sanken CO-100K microphone to create the new roar of the beast and a bizarre array of otherworldly sounds. Van der Ryn and Aadahl are responsible for the sound design and sound editing of the “Transformers” and “Kung Fu Panda” films. Other credits include the “Lord of the Ring” series and “The Tree of Life.” Together they have garnered seven Oscar nominations and two wins.

“The Sanken microphone is a window into a whole invisible world of frequencies that are beyond our human capacity of hearing,” explained Erik Aadahl. “The mic captures an incredible world of sound that we can then bring into our software, slow it down, pulling all of those high frequencies into the audible realm.”

The new 2014 “Godzilla” features the Japanese film monster of the same name in a reboot of the film franchise, retelling the origin of the beast in contemporary times as a “terrifying force of nature” in a style faithful to the Toho series of “Godzilla” films. The film is directed by British filmmaker Gareth Edwards, written by Max Borenstein and stars Aaron Taylor-Johnson, Bryan Cranston, Ken Watanabe, Elizabeth Olsen, Juliette Binoche, David Strathairn and Sally Hawkins.

“Godzilla’s original roar from the 1954 Toho film was created using a double bass and a leather glove with pine tar rosin to create friction,” explained Aadahl. “Using the Sanken 100K mic, we recorded the friction of a glove going across the strings to reproduce that iconic Godzilla roar, probably the most famous sound effect in cinema history. The Sanken was one pretty incredible tool for being able to create sounds that one could never hear.”

With a 20Hz – 100kHz range, the Sanken CO-100K omni-directional condenser microphone is the world’s first 100kHz microphone designed specifically for professional recording, not test purposes. The information contained above the standard frequency range can be captured and reproduced using sample rate and pitch techniques familiar to industry professionals. Numerous everyday sounds were transformed by e2. “Dry ice was a big player for us,” explains Aadahl. We used a big block of dry ice, resonating against a six foot cylinder of metal ventilation tubing.”

Aadahl and Van der Ryn also recorded sounds on the deck of the USS Ronald Reagan aircraft carrier. “That was an incredible experience,” recalls Aadahl. “Just living a few days on an aircraft carrier informs you so much about what life is like on a ship, what the real world sounds are.”

Van der Ryn adds, “Key to our philosophy is recording new sounds to design with. Using this palate of fresh ingredients, we strive to make a wholly unique and expressive sonic story-telling experience. The only way you can accomplish that is to truly keep your ears open.”

APRIL 2014 – Pictured in their studio at Warner Bros. are sound designers (L-R) Ethan Van der Ryn holding the Sanken CO-100K microphone and Erik Aadahl. On the monitor, Aadahl is seen holding the mic on the deck of the USS Ronald Reagan. Photo by David Goggin. Image below is the e2 team. 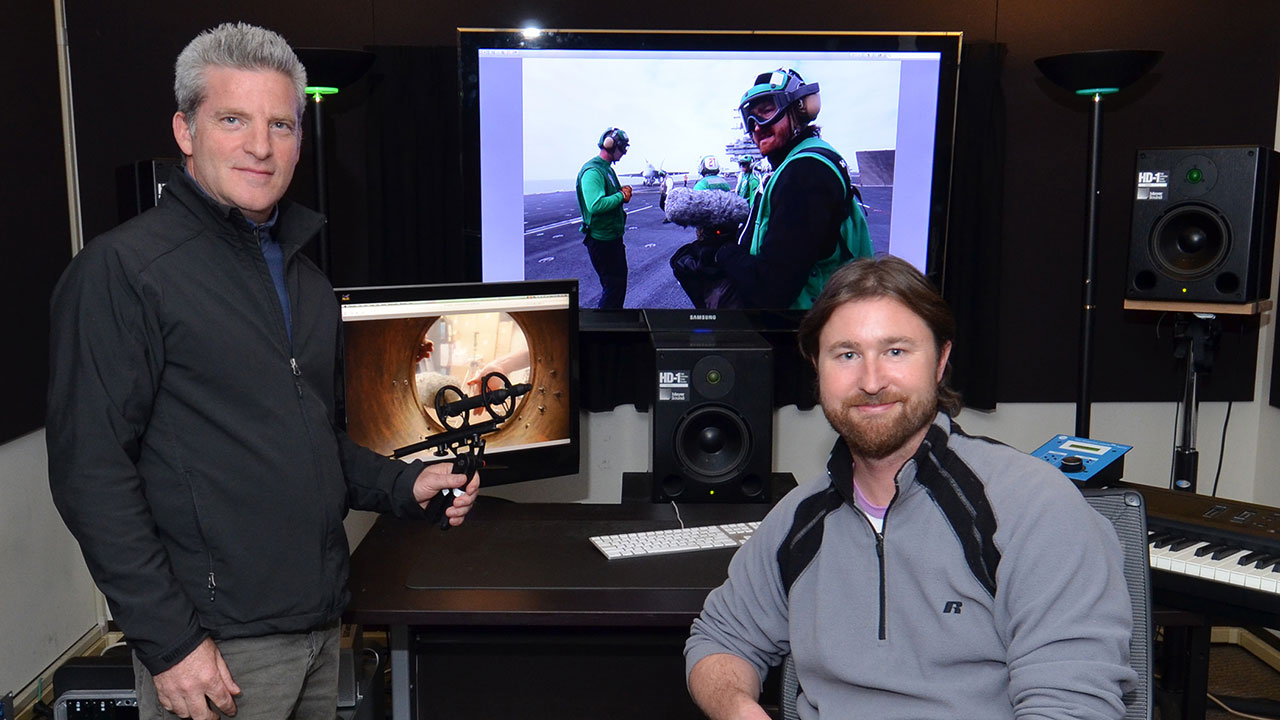 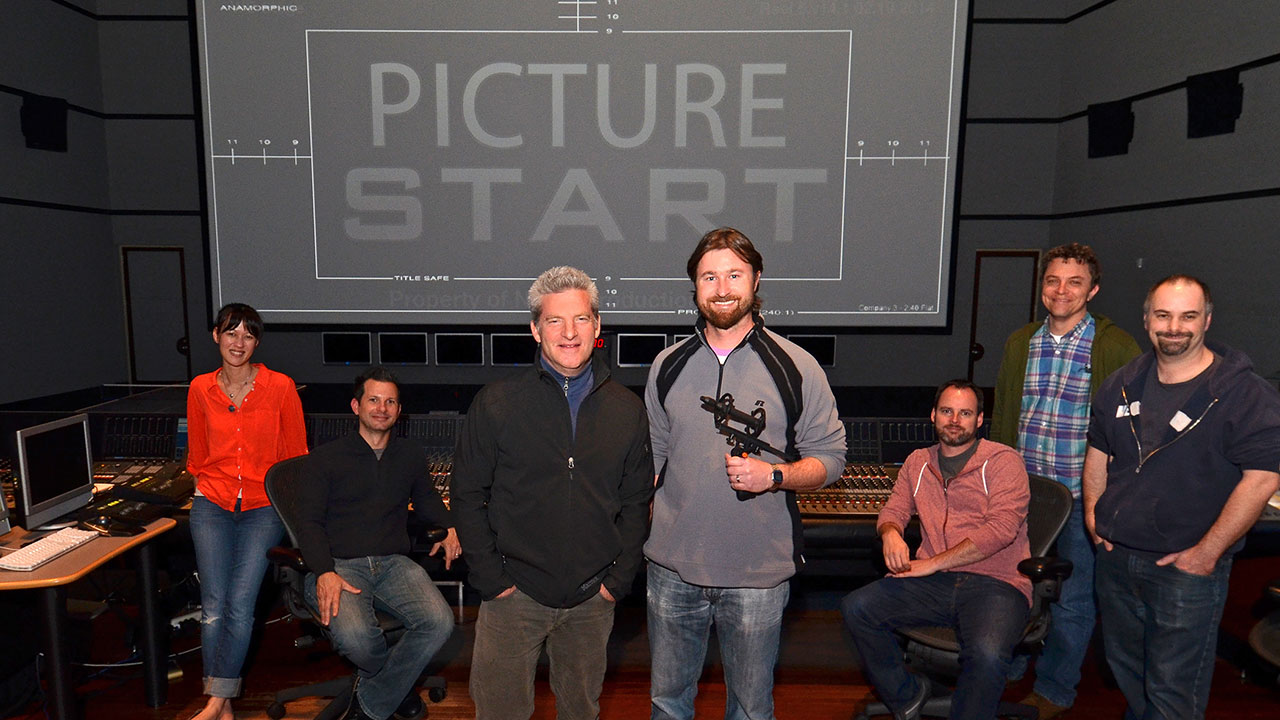 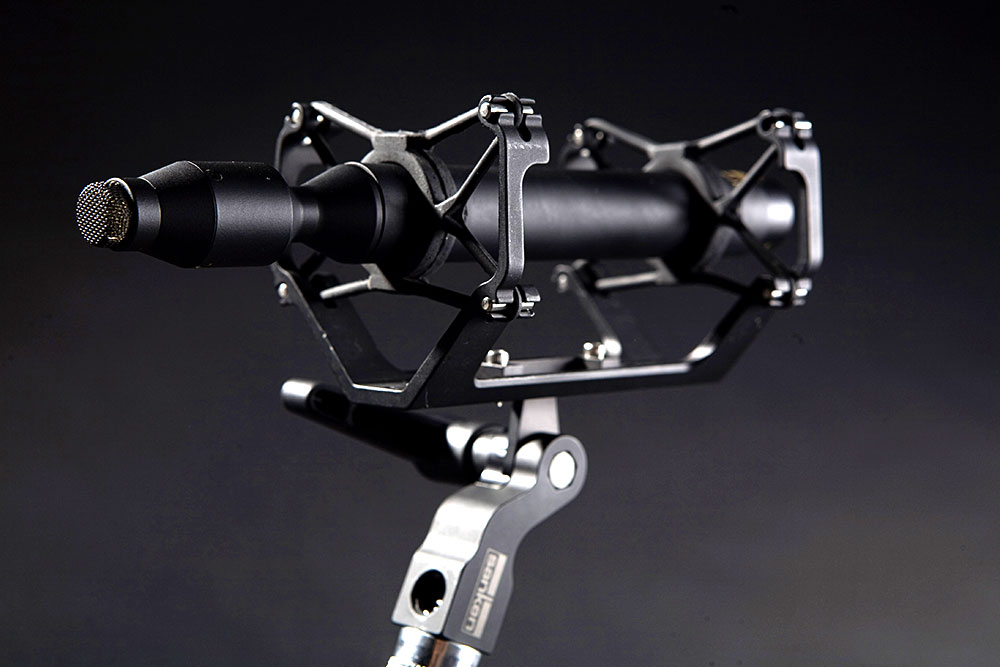